I wanna give a massive S/O to my mum-readers out there with pygmy’s the same age as mine.

The resident Pygmy around here has recently turned 3 and I have to say, I’m actually missing the terrible two’s. Apparently, the Three’s is the one that’s gonna get you.

Maybe I got off light with his twos… yeah he was stroppy and unreasonable and even through in the odd tantrum but this… THIS tiny little monster he’s become since he turned (turned 3 that is) is unbearable. There is simply no logic behind the screaming, crying, throwing, hitting and general exorcism-worthy behaviour.

And that’s just him!

I don’t even recognise the person he’s turned me into lately. I’m short-tempered, exhausted and generally defeated in all areas of my existence. (and yes, I’m being dramatic)  Something’s got to give.

Either he wins, or I do. And I have no intention of losing!

To be fair to Pygmy, he’s not like this all in the time; but when he is, boy oh boy do you know it.

Hold tight  Adventurers… I think it’s about to get bumpy! 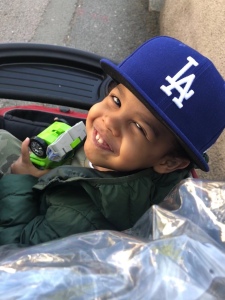 Insta- window into my world

Experience The Finest Travel, Food and Lifestyle Stories Around The World

Mommy to a two year old. Here you will find our adventures, our learning experiences, and lessons learn in parenthood.